Digbeth hosted Birminghams first ever Peaky Blinders Immersive Festival last weekend, and never one to shy away from flat caps and fur coats, I was there in true 1920's fashion!

I thoroughly enjoyed the event. Everybody made a huge effort, Peaky Blinders bingo was bang on, the band was brilliant & the actors throughout were very entertaining. Who'd have thought? Pretend prostitutes propositioning your boyfriend is actually quite amusing!

Peaky Blinders creator and born & bred Brummie boy, Steven Knight, popped his head into our Digbeth based studio earlier in the month to say hello, much to the excitement of TT's passionate film-makers!

In Birmingham Live, he has reportedly said that the time has come for a creative revolution in Birmingham. That it’s time we let the world know we’re here, and what we’re all about.

And I couldn't agree more! Birmingham is such a fantastic place to live & work. The city truly feels like a community which is filled with passion & prospects.

We have the highly-anticipated HS2, huge businesses like HSBC are moving here, we're hosting the Commonwealth Games in 2022 and there's also talk of Steven Knight opening his very own film studio in Birmingham.

HOW exciting is all of that!?

Huge thank you to Paul Martin from The Mighty Shed for the amazing picture! 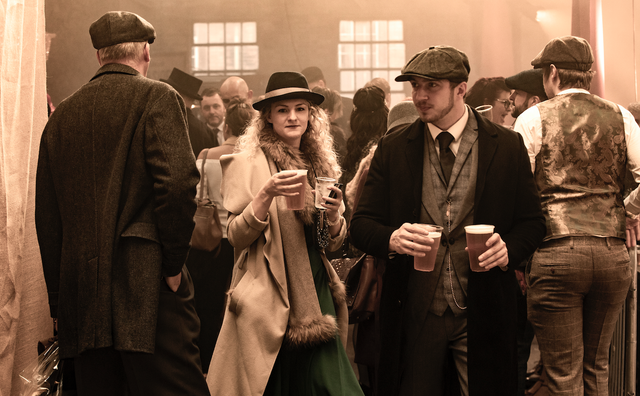 Birmingham named 'one of the top 10 cities in the world' http://t.co/ngiWvfDG9E

For all @peakyslive Immersive Festival attendees this weekend, as this is a fully themed event, all guests must be dressed in authentic turn of the century attire. BY ORDER OF THE PEAKY BLINDERS! 🕵 pic.twitter.com/KAwnflP33K

THIS WEEKEND!
Peaky Blinders Live Festival set to be a complete ‘blinder’ at new venue on 29-30 Sep. MORE > https://t.co/b7MdcJeR9X pic.twitter.com/dQYhpcRsBy

Major new #TV and #film #studios - Mercian Studios - is to open in #Birmingham. Steven Knight, the Birmingham-born screenwriter, film director and creator of @ThePeakyBlinder, has revealed plans for a six-stage TV and film studio complex in the city - https://t.co/b53f0zaYWZ

Steven Knight, founder of the Peaky Blinders TV series, is planning a huge new TV and film studio to be built in the West Midlands.