To 'steer' a new multi-million pound campaign, Audi 'drive' in a couple of clowns! (wow - please excuse the puns!).

Audi will debut it's new ad during Victoria on ITV, followed by an appearance at the British Film Institute in London, and a national launch in cinemas. With one big, whopping awareness campaign, Audi are going to make sure you see this film.

Don't get me wrong, a prime time television slot and a golden space at the British Film Institute will rack up the ££ and is probably a little too excessive for most, however, cinema is a different ball game.

Having your service or product on the big screen, alongside these multi-million pound ad's, can seem like quite an intimidating & daunting process - but it’s not!

The first step is to pick your plan. To ensure your ad is played in front of your target audience and is therefore as effective as possible, you’ll need to buy a cinema package which is relevant to your market. There are a variety of options; the 3 most commonly used at TT are -

This package ensures your ad will have maximum coverage & is great for awareness campaigns. Your ad will be shown in all films playing across your selected dates, ensuring it's being seen by a variety of cinema audiences. You can run these campaigns nationally or regionally.  You get a guaranteed number of views, so you'll select the number of people you want to view the film, and then the campaign will play out until you have X number of bums on seats.

This package is very similar to the package above, however it is aimed at cinema goers who are 16 +. You’re therefore removing your ad from the ‘family film’ reel’s, ensuring your spend isn’t being wasted on films which aren’t likely to be viewed by a 16+ audience. We’ve launched brilliantly effective cinema campaigns for the Scottish Police Federation using an Adult AGP, we achieve maximum coverage across Scotland, whilst ensuring the ad is viewed specifically by people who are eligible to vote.

This package only launches your ad in the independent cinemas (Everyman, Electric). These campaigns can be really effective to engage with the people of Birmingham (or whichever city you’re advertising in). Often independent cinemas are community hubs; attracting an older and more affluent cinema-goer, so launching a more prestige product, service, venue or offering which is available in the city, to this audience, can be really effective.

There are tons more options, and you can start being even more targeted! You can choose the exact films you’d like to have your ad appear (we ran a campaign which saw our TrainSpotting inspired ad air in cinema ad reels, right before the eagerly anticipated TrainSpotting 2 film). You can choose a package depending on which gender you want to appeal to, i.e. putting a make-up ad in the reel before the Bridget Jones’ film (although I’m sure some men are privy to a secret binge on Bridget Jones!). You can also choose a family package, an alcohol / gambling AGP or a youth package.

The beauty of cinema advertising is that you have a closed, engaged audience, all of whom are sat patiently, waiting for your ad. They have gone to the cinema to watch and listen.

If you want to be up there with the Audi clowns, we can help you decide which cinema plan will be the most effective for your campaign.

Audi sends in the clowns for big-budget tech campaign. Audi has enlisted a troupe of clowns to convey a serious message about the car brand's technologies in a new multi-million pound campaign. The "Clowns" ad, created by Bartle Bogle Hegarty, depicts the circus stars wreaking havoc on the roads with their antics. Audi vehicles save the day with tech safety features including adaptive cruise control and park assist, introducing the tagline "Audi technolI ogy. Clown proof."  The film marks the return of award-winning director Ringan Ledwidge, who directed Audi’s "Duel" spot in 2016. "Clowns" will debut on 1 October during Victoria on ITV. It will also be the first ad to be shown at the British Film Institute in London just before the screening of the main feature film. 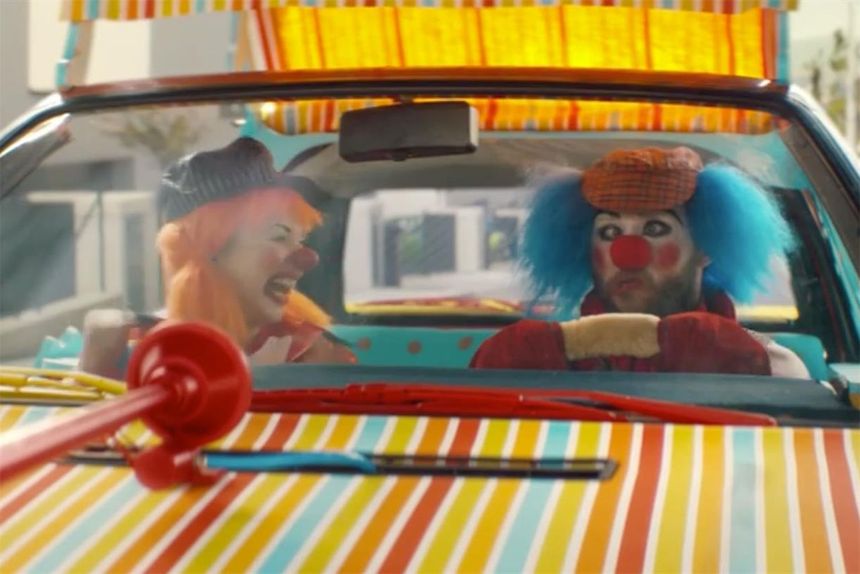 Audi sends in the clowns for big-budget tech campaign https://t.co/mmIcg1oASx