This weekend I was sat in the O2 crowd, ready, eager and super excited to watch the highly anticipated Haye vs. Bellew fight. I was team Haye, and I wanted blood, sweat & tears!

5 rounds in, and it was all looking good. The atmosphere in the arena was electric & although our bet of a 3rd round knock out was out the window, we were still feeling optimistic for a Haye win.

6th round; and the audience fell silent. To us, watching from the floor, it looked as though Haye had reached his limit & wasn't fit enough to continue. Utterly disappointing for everybody who had splashed out a small fortune to be at the fight.

Afterwards, we were drowning our sorrows at the hotel bar and read an article which said he'd torn his Achilles and so was effectively fighting on one leg for 5 rounds, before finally throwing in the towel. Such a 'warrior', they all said.

This made me think. The atmosphere at a live event is incredible, but you only have your own senses to guide your opinion. Yet when watching something on the TV, like Haye's fight, there are so many elements which can influence your perspective. These can range from the smaller things, such as the camera angles, (if the camera is high, looking down on the subject, they appear small and timid, whereas if the camera is low, looking up, it makes the protagonist look bold and superior). To the bigger, more obvious external influences such as the commentator narrating the fight, sharing his opinion with you.  If the narrator is passionately screaming as the action is taking place, exhilarated by Haye's determination to continue on one leg, you will instinctively feel sympathy towards Haye, not frustration, as I did.

This just shows the power of film. By utilising different cinematic techniques we are actively manipulating our viewer's opinions and influencing them to think in a certain way.  Whatever the objective may be, we can always use film to influence people. It's an incredible means of communication.

WBC cruiserweight champion Tony Bellew produced a stunning upset to stop bitter rival David Haye in a thrilling heavyweight contest at London's O2 Arena. The Liverpudlian, 34, pounced when Haye suffered what turned out to be an Achilles injury in the sixth round to score a knockdown. Haye, who had his right ankle strapped, carried on as bravely as he could for the rest of the fight, but was unable to move freely as Bellew seized the momentum. And in the 11th, a second knockdown saw former heavyweight champion Haye tangled in the ropes, the towel enter from his corner and his hopes of a return to the world-title level of the sport left in tatters. 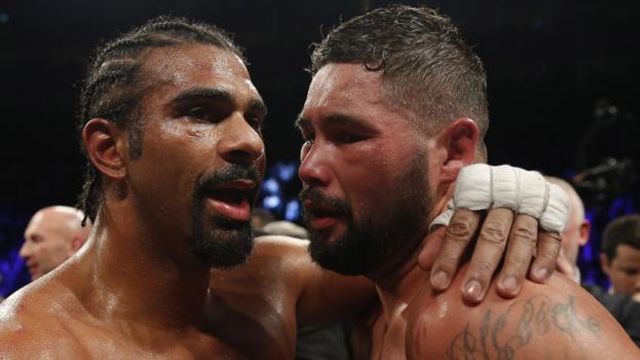 We're sure there will be quite a lot of people shocked at the #HayeBellew result from the fight this weekend! https://t.co/hD0rXC8SxZ

Tony Bellew broke his right hand in the 2nd or 3rd round of last night’s... https://t.co/XVifqXYCfs by #BBCSport via @c0nvey pic.twitter.com/yTCy2HTji1